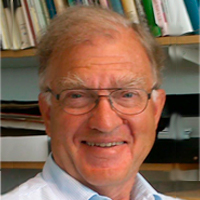 Prof. Sten Grillner is a Swedish neurophysiologist and distinguished professor at the Karolinska Institute's Nobel Institute for Neurophysiology in Stockholm where he is the director of the institute. He is considered one of the world’s foremost experts in the cellular bases of motor behaviour. His research is focused on understanding the cellular bases of motor behaviour; in particular, he has shown how neuronal circuits in the spine help control rhythmic movements, such as those needed for locomotion. He is current secretary general of International Brain Research Organization IBRO and President of the Federation of European Neuroscience Societies (FENS). For his work, in 2008 he was awarded the $1 million Kavli Prize for deciphering the basic mechanisms which govern the development and functioning of the networks of cells in the brain and spinal cord. This prize distinguish the recipient from the Nobel prizes in basic medical sciences.[2]

Notable Neuroscientists like Eric Kandel, 2000 Nobel Laureate in Physiology or medicine named Grillner’s work on the workings of complex neurocircuitry extremely important and this progress in understanding motor systems, the cognitive role in motor systems, is a brilliant advance and has revolutionized our understanding of how the nervous system is wired.[3]

Prof. Grillner studied at the medical faculty in Gothenburg, Sweden, and received his Doctor of Medicine (MD); PhD in neurophysiology in 1969. He has been a Professor and Director of the Nobel Institute for Neurophysiology at the Karolinska Institute since 1987. He is a member of the Academia Europaeae, Royal Swedish Academy of Science, National Academy of Science (US), Institute of Medicine (US) and former member, deputy chair and chairperson between 1988-2008 of the Nobel Assembly at Karolinska Institutet which awards Nobel Prize in Physiology or Medicine, and has received a number of awards including the Bristol-Myers Squibb Award in 1993 and the Reeve–Irvine award in 2002. He was the co-recipient of the 2005 SfN Ralph Gerard Prize, highest recognition conferred by Society for Neuroscience and he was a co-recipient, with Thomas Jessell and Pasko Rakic, of the inaugural Kavli Prize for Neuroscience in 2008.