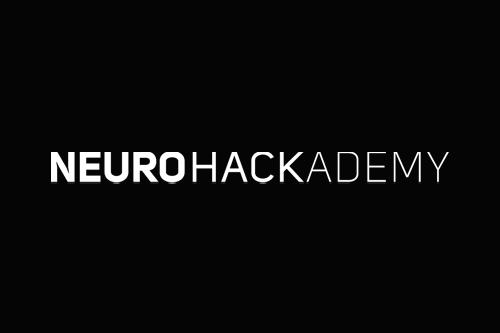 It began in Summer 2016 as Neurohackweek, then a one-week program for 40 participants, and now accepts 70 participants each year, for two weeks of courses led by instructors from the neuroimaging community. Since 2017, it has been supported by NIMH (National Institute of Mental Health), and it recently got its grant renewed until 2027. This year’s course will be held in a hybrid format, in Seattle and online, during July 25th – August 5th, 2022.

A selected set of lectures from the 2018 and 2019 NeuroHackademies are available as a course on Training Space, as part of the INCF initiative to support virtual neuroscience training by leveraging its training platforms, TrainingSpace and Neurostars.

We have interviewed Ariel Rokem to learn more about the course, how it came to be, and what makes the hackathon culture a great space for collaboration and learning.

What inspired you to start this course?

My inspiration to start NeuroHackademy came from my own experiences as a graduate student, dealing with ever-larger datasets and increasingly complex analysis methods and pipelines, but with very little formal training in the software engineering, data management, and statistical analysis approaches that I needed in order to do my research in a way that was robust and reproducible. Instead, many of these skills were acquired rather haphazardly, by seeking out informal mentorship, or through self-teaching.

Another source of inspiration are grassroots communities that work to improve the transparency of computational methods in neuroimaging data analysis. For example, the community that develops open-source software for neuroimaging in Python, in which I have been active since my time in grad school, and the Software Carpentry community, which teaches researchers computational skills in two-day workshops that are led by volunteer instructors.

One of the places where this all came together for me was a hackathon organized by the Brainhack community at the Organization for Brain Mapping conference in Seattle in 2013. All of sudden, I could see how ad-hoc collaboration in a hackathon was a powerful way to learn new things and form connections with a community of computational neuroimaging researchers. Finally, when I joined the University of Washington eScience Institute in 2015, I got to see how other fields are navigating these issues.

In summer 2015, some of my astronomer colleagues at eScience organized an event that they called Astrohackweek, which was a mix of an un-conference, a summer school, and a hackathon. It looked like a lot of fun. That same summer I happened to run into Tal Yarkoni at the annual Scientific Python conference in Austin, Texas. We got to talking about these ideas and thus, first NeuroHackweek (in summers 2016 and 2017), and eventually NeuroHackademy (the two-week version, 2018 and every year since) was born.

I eventually also wrote a paper together with some of my astronomy and geoscience colleagues that explained the similarities and differences between these events in different fields (https://www.pnas.org/doi/10.1073/pnas.1717196115). More recently, Tal retired from scientific research and joined the IT field. My colleague Noah Benson, who is a neuroscientist and a data scientist at the eScience Institute, and was previously a NeuroHackademy instructor, joined the team as co-director of NeuroHackademy, and co-PI of the grant we just renewed, and he will be co-leading the course this year and in our upcoming years of funding.

What is your goal for the course?

The course has several goals. The first is to enable neuroimaging researchers to do sophisticated, robust, and transparent data-intensive research by developing their computational skills. We rely on hands-on tutorials and lectures to teach some of these topics in the first week of NeuroHackademy, and also on the peer-teaching-and-learning that happens in a hackathon in the second week of the event.

Through an awareness of computational methods, we hope to also improve the overall reproducibility of research done in the field. Finally, it is an opportunity to develop the community of practice that exists in the intersection of neuroimaging and data science, and to broaden the participation of researchers from all over the world and from many different backgrounds in this community.

What disciplines do the attendees come from?

We have participants from a wide range of research fields and from all over the world. Many come from a background similar to mine: students in neuroimaging fields (e.g., Psychology, Neuroscience). Less commonly, we also get researchers with a background in computer science and engineering, or statistics, with an interest in developing research in neuroimaging fields.

"Hacking" forms part of the summer course, and you were also one of the co-authors on the Brainhack paper that came out last year. What can the hackathon culture contribute to neuroscience?

The second is that hackathons, much more than traditional conferences and workshops, provide a fertile ground to establish and try out new collaborations. People from different institutions, with different interests and expertise, can quickly come together to try different ideas out together.

Third, hackathons are an excellent venue for people to learn from each other. This is because folks who come to the hackathon may bring complementary skills and expertise, and these can be surfaced through the joint work.

Finally, Brainhack culture, in particular, is incredibly inclusive and always aims to break down barriers. Rather than being techno-elitist (something that is a feature of some hackathons), Brainhacks aim to bring people together. One simple way in which this manifests is that these hackathons (and NeuroHackademy) -- in contrast to some hackathons -- are not competitive events. This encourages people to solicit and take interest in each others' work.

The course has become very popular.  Is there an unmet need for this kind of education, in the neuroscience community?

There is definitely still an unmet need. We typically get between 3 and 6 times as many applications as we can accept, and applicants always express very clearly the gaps that still exist in neuroscience training in terms of data science skills. We're covering this gap slowly through this kind of work, but it's a bit like trying to empty the sea with a spoon. Data science methods are still rapidly evolving, large data sets are growing ever-larger, and formal training programs are still catching up with these developments rather slowly.